Berenjak and Pizarro: ‘It tastes of somewhere else’ – two meal kit reviews 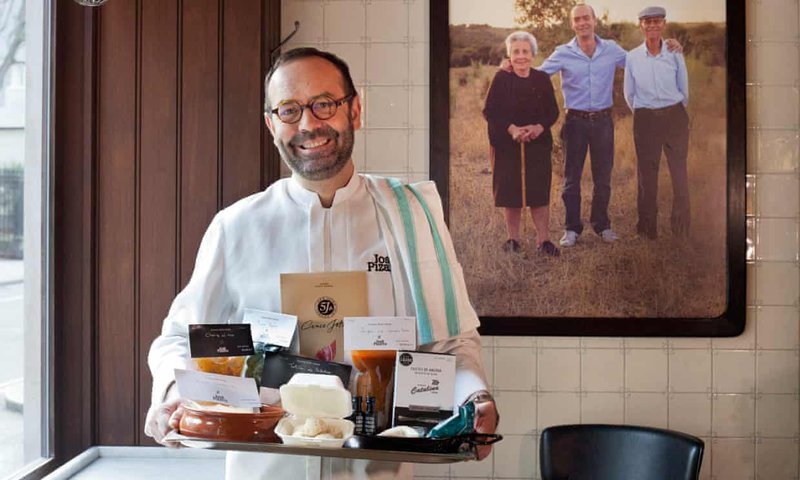 A single red onion has been delivered to me. It arrives in a brown paper bag alongside taut-skinned tomatoes, a lemon and some plastic gloves. I am instructed to slice up the onion, then dress it with the juice of half the lemon and a fair amount of sea salt (cook’s own). So far, so ludicrous. It’s not as if I can’t buy my own onions and lemons; my lovely local corner shop is stacked with them. But right now, I am gagging to be infantilised. Tell me what to do and I’ll do it, if there’s the slightest chance it will invigorate my kitchen.

And look, here come the extras that they don’t have round the corner: the small bottle of nutty, deep argan oil; the pot of dried parsley mixed with the brilliant purple of sumac, the performance-enhancing spice for all citrus. I dress the salad as the recipe insists I must. Suddenly I have on my table the kind of onion salad I would otherwise not have been able to make for myself. It tastes of somewhere else, which is exactly what I need. I hanker for elsewhere.

The onion salad is a mere sideshow to the £45 Kabab e Tond kit. It comes from the Iranian grill restaurant group Berenjak, launched in 2018 by JKS, the dynamic restaurant company behind the likes of Gymkhana and Brigadiers, the Taiwanese Bao group and the Sri Lankan Hoppers. JKS is a class act that attends to the details, and this kit is full of them. It includes a pouch holding chunky slabs of lamb marinated in a mess of chilli, tarragon and yoghurt, and another of chicken in a red pepper, chilli and garlic paste. The gloves are to be worn while spearing the meat on to the flat metal skewers.

They tell me the best way to cook this is over coals, but it’s winter and it’s raining and there are limits. Instead, I am invited to crank my oven grill up as high as it will go and cook them with the oven door open, over the tomatoes. (Check your oven will allow you to do this; some grills cut out if you leave the door open for too long.) I pull up a kitchen chair and sit in front of that oven, imagining myself to be one of those intense, moustachioed chaps in the grill houses along Haringey’s Green Lanes, tending with due care to meat on sticks. I am very happy here, sitting in front of my oven. It feels like proper work. I brood on a career change.

There are also flatbreads, the size of a school desk. I am instructed to fold one of these and place it on top of the meat for a couple of minutes under the grill, then flip everything out on to a plate with the bread underneath. Use another piece of flatbread as an oven glove to hold the meat in place as you drag out the skewers. The result, which feeds four greedy people well, is delightful: smoky, deeply sauced grilled meats, which have given their all to the heat-slumped tomatoes; that onion salad for punch; a side of mast o musir, a thick seasoned yoghurt full of chopped shallots. The Berenjak box is the best kind of meal kit. The process of cooking its contents is a fun and unintrusive education. If all you want is dinner, do not get this. It will annoy you. It didn’t annoy me. It made me happy.

As did the offering from the Spanish chef José Pizarro, who has a number of restaurants including two in London’s Bermondsey. His menu of tapas and sharing dishes comes with added kitchenware. The chicken and seafood rice for two arrives with the paella pan to cook it in: a good deal for £18. Gently fry the uncooked rice in the supplied olive oil in the pan, while heating up the seafood stock, bobbing with pieces of chicken, in another pan. Introduce one to the other and cook together for seven minutes. Put it in the oven for five minutes then bring it out and rest, covered by a tea towel for another five. Yes, of course you use a clean tea towel. What kind of heathen are you?

I suspect Pizarro is not calling it paella to avoid an international incident. Whatever the name, it’s a deeply pleasing dish of nutty rice and chicken with a big savoury boost from the seafood stock, which leaves us scraping at the enamel. There’s also a patatas bravas kit for £5. Some people will roll their eyes at the notion of buying their potatoes pre-parboiled. Roll away. These are the right potatoes cut to the right size pre-cooked in the right way. The result, when turned in a little oil and pushed through a hot oven for 10 minutes, is bang on: crisp and rustling and soft inside. There’s both a rowdy aioli and a chilli and paprika sauce the colour of old, rusted iron to help show them a good time.

We have pert chorizo sausages cooked in a wine-rich stock, to be heated until the sauce is sticky and reduced in a way that will coat your lips, and a snowy slab of hake in a white sauce, to be warmed through in its bag. At the end there is a pouch of Basque cheesecake mix, and a glossy terracotta bowl in which to bake it. This makes me feel like I’m being a proper conscientious cook, even though I’m not. Once cooled I dribble its bronzed surface with the contents of the lavender honey pouch and am struck again by the joy being in the detail, like those vivid dabs of colour in an otherwise brooding landscape which bring it to life.

I’ve made all this sound like a smooth process. Welcome to my wonderful, gilded life, and so on. In reality there was a tedious struggle with an unresponsive courier company, which failed to do its job. At one point, money was reimbursed because a box hadn’t arrived and then paid out again, because it had. I mention this partly in the interests of full disclosure, but mostly to commiserate with the restaurants involved. They’ve done lavish things to adapt and change, but sometimes have been let down by others in the supply chain. It comes with the territory, I suppose. Nevertheless, both these restaurant meal kits were worth the wait. They brought a level of detail into my kitchen that I wasn’t quite up to supplying myself.