How do I make authentic paella? 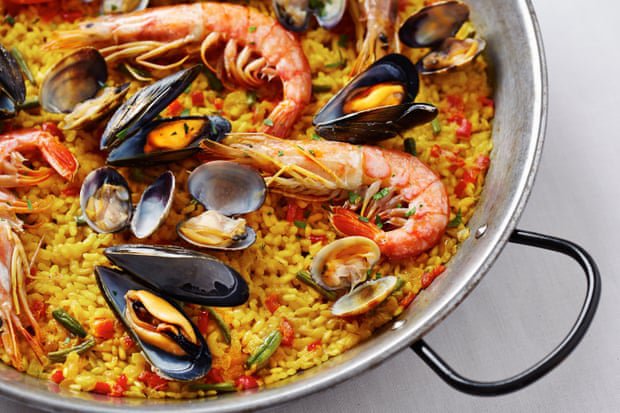 Most people cock-up paella because they stray too far from the dish’s humble, rural origins, says chef and restaurateur José Pizarro. “Traditionally, it’s made with only 10 ingredients,” he explains. “That is, olive oil, chicken, rabbit, green beans, garrofó [A-grade Valencian butter beans], tomato, saffron, salt, rice and water or stock.” Depending on season and location, he says that this base is supplemented with a few other ingredients, from garlic and onions to peas and pimentón (smoked paprika) to game, snails or seafood, but that’s about as far as you ought to go, or you risk tipping your Spanish rice into caricature territory.

Spanish uber-chef Quique Dacosta, who last year opened his first UK restaurant, the paella-based Arros QD in London, agrees: “All the ingredients are important, but the king is the stock, because that’s where much of the flavour comes from.” For this reason, he never uses concentrate or cube, and insists it’s made from scratch, “mainly because you have no control over its quality otherwise, and also because the whole paella ritual always starts with the stock”.

Angel Zapata Martin, head chef at the four-strong Barrafina group of restaurants in London, makes his stock first by roasting the bones, trimmings and shells of whatever meat or seafood he’s using in the paella, then puts them in a pot with shallot, carrot, fennel, garlic, tomato paste and pimientos choricero (dried pepper) or pimentón, all topped with water. “The secret is not to use too much, or you’ll end up with a bland stock,” he says. “Three fingers above the solids is plenty.”

The type of rice is also critical, all three cooks agree, and it has to be Spanish medium-grain. Pizarro and Dacosta recommend senia rice from Valencia, the home of paella, but say bomba or albufera will also do the trick; Zapata is rather more specific: “The rice is key – I use only Illa de Riu bomba from southern Catalunya, which benefits from the rich soil in which its grown.”

Paella is, of course, named after the pan in which it’s traditionally made, and Dacosta is adamant you shouldn’t really call it paella if it’s not cooked in one: “It’s just not the same in a frying pan.” Zapata, however, isn’t quite so strict on this particular score: “Yes, a proper paella pan is preferable,” he agrees, “but the closest you have to a very wide, flat pan should be OK.”

Once you’ve fried off the sofrito base – diced onion, garlic, tomato and, perhaps, red pepper – and browned the meat, stir in the rice to coat, pour in the stock … and leave well alone: “Never stir paella,” Pizarro warns, a sentiment Zapata endorses: “It makes the rice go stodgy and mushy.” We’re not making a risotto here, after all.

Dacosta uses 1,200ml stock per 240g rice, and cooks it for 20 minutes precisely – “We start counting the moment the stock goes in the pan” – until the liquid’s absorbed and the rice is plump. The Valencian way, he says, is to end up with a thin layer of flavour-filled rice with a crisp base, or soccarat. To get the same effect, Zapata recommends leaving the pan on the heat for a short while after the rice is cooked, “until you hear it sizzle and see the edges crisp”. Mind you, Dacosta adds, “not all paellas have soccarat and not everyone loves it”.

Another flaw of many a dodgy paella, Dacosta says, is that “the vegetables are often horribly overcooked by the time the rice is ready”, so add them only after it’s half-cooked. “And always use proper saffron,” Pizarro says, “never turmeric or colourant – that’s sacrilege.”

A scattering of fresh herbs and a dash of lemon is all you really need to finish, but for a more cheffy flourish, Zapata adds a picada for a last hit of flavour: “Blend saffron, raw or roast garlic and white wine, then pour all over the paella and leave to soak in for a few minutes before serving.” ¡Buen provecho!